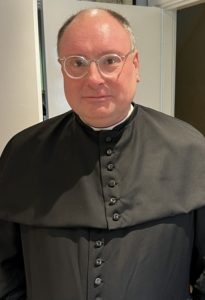 Fr Robin is married to Marina Jones, the Deputy Director of Development at the English National Opera; they have two children. Fr Robin is a qualified cricket umpire, although time limits the games he can stand in. He is interested in reading about and observing American and British politics. On quiet night he may be found at the  Opera (probably Puccini or Mozart!) or the Theatre. He also has a gentle interest in railways and their history and owns an alarmingly large collection of brown shoes for a priest!