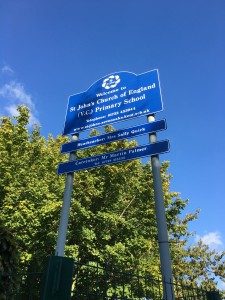 St John’s is proud to have its Church School, St John’s C of E Primary. St John’s is a very popular local primary school led by its superb headteacher, Mrs Sally Quirk. It is a Church of England controlled school, the Church, or ‘foundation’, supplying twenty-five per-cent of the Governing Body. It holds as its explicit Christian values compassion, forgiveness, trust and tolerance.

Fr Robin or Fr Matthew hold weekly assemblies in the school and the school holds Masses, seasonal and leavers services, and a School Sunday at St John’s. In addition there are good links with school families attending St John’s on a Sunday and at Messy Church.

The school was founded by the Church in 1865 to serve the St John’s Hill area. It was originally housed in a building opposite the Church before being moved, on a temporary basis, to the current Sevenoaks Primary School site. In 1978 it was moved to the former Bayham Road Boys School, where it has been ever since. Recent years have seen a complete overhaul of the current buildings and two new classrooms, completed in 2014, to deal with the increased popularity of the school.